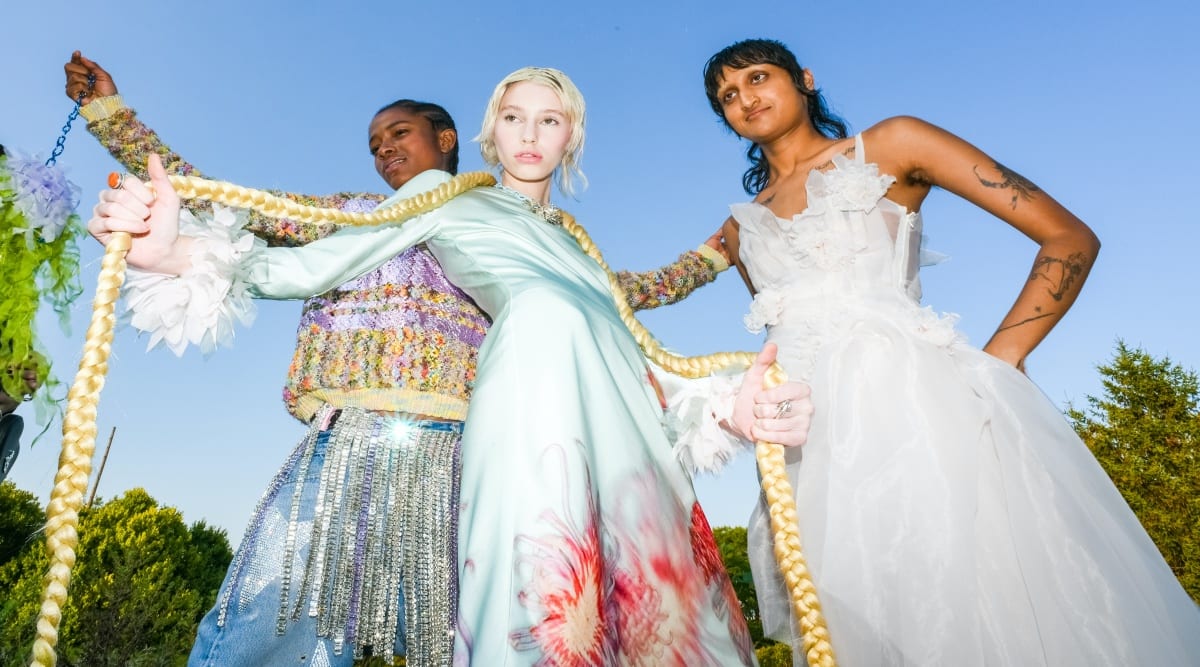 It was raining on the Tommy Hilfiger runway parade.

The designer returned to New York Fashion Week after a few years away with his signature see/buy now preppy cosplay and a special “Tommy Factory” extravaganza made in Andy Warhol’s factory. (The two men met in the 1980s, and, Hilfiger said in a preview, he’s been inspired by Warhol ever since.)

He covered an outdoor catwalk in what looked like a la Warhol in silver tinfoil for his set, arriving through a silver-covered courtyard where artists silk-screened posters of Hilfiger’s faces behind the camera, like Warhol’s self-portraits. And he invited a soup of famous people, many of them in the new Hilfiger ad campaign, to sit front row: Kate Moss, Jon Batiste, Shawn Mendes, John Legend. He had an interesting collaboration on the runway with the great British designer Richard Quinn, as well as former Warhol “tape recorder” Bob Colacello. He was even there to drum up Travis Barker in the finale. But he had no tent, and it was going down in buckets.

Even the biggest stars couldn’t stop the result from looking like a damp squib: an empty shell of clichéd American references (varsity jacket! rugby shirt! tennis sweater!) in a world where they don’t have much truck with more, covered in razzmatazz that’s weathered. Underneath, there wasn’t much substance. And substance is what New York fashion really needs.

Like many things now, there is a divide between what was and what could be.

Many of the names that once defined the city’s style are gone — or at least off the official runways: Calvin, Donna, Ralph, Mark. The generation of designers who came next and were heralded as the Next Big Thing seemed to stick to a very minor key.

At Proenza Schouler, Lazaro Hernandez and Jack McCollough added giant flamenco ruffles to the sleeves of their tunics and minidresses. They upsized the flares of their skinny pants; Layered shirt dresses with fluted cuffs and polka dots are rendered in sheer lace. But they still look like they’re designing for Chelsea’s art crowd, when the art crowd has moved on. Jason Wu continues to create Daisy Buchanan cocktail dresses in bias, fringe and crystal mesh for Stork Club of the Mind, all beautifully generic. Josef Altuzer settled on a rhythm of anoraks, striped shirting and highly detailed, increasingly intricate shibori, creating a cool, if predictable, contrast.

At least they didn’t lose their way like Prabal Gurung, who took an unexpected detour between peekaboo, latex and lace in sheer pants, corsetry covered only in acres of tulle, and at one point, mistakenly exposing second stepdaughter Ella Emhoff’s breasts. Show notes that framed the whole thing as a response to “patriarchy” and “regressive values” didn’t help make sense.

Yet at the same time, new names are muscling in from the fringes, often without classical training but with the confidence and explosive energy that has historically driven fashion forward.

They have little to do with Seventh Avenue and much to do with the community from which they spring. Their origin stories often relate to making clothes for their friends, not department stores. Their audiences are often filled with like-minded people, who block the road like gangs in advance. You can tell because at least half of the attendees are wearing the designers they’ve come to see — not as paid ambassadors or influencers, but as genuine converts. Their friends often model in their shows.

And those designers are redefining power dressing not as a uniform for climbing the corporate ladder (what now, anyway, about missing office hours?) but as the identity uniform of a mosaic of subcultures.

Andrew Bolton of the Met’s Costume Institute picked it up in the contemporary section of his show on American fashion, and it’s running on the runway.

Also, Mike Eckhaus and Zoe Latta of Eckhaus Latta, whose clothes are the fashion equivalent of collectible ceramics. They combine high craftsmanship and technique with a raised eyebrow and stretch ribbed knits printed with the work of painter Matthew Underwood, squishy bubble tops with foam on the torso, metallic T-shirts and some unexpectedly bare limbs, a pair of pants with one leg.

Both labels began as semi-industrial projects but have become increasingly serious businesses, which seems to be the direction of mixed media artist Carly Marx’s line Puppets and Puppets. This season she’s mixed bumster dresses, lace bodysuits and trompe l’oeil bodysuit leather with simple zip-front sheaths, little crystal cardigans and skirt sets, and the snack-food-decked handbags that are already a signature.

And also, Everard Best and Téla D’Amore of Who Decides War, a brand built on the idea of ​​denim as a universal American religion, and jeans in all their iterations — frayed, embroidered, patched, painted, with stained glass portraits, water drops. Speckled with rhinestones, draped in lace like a baptismal gown, references climate change, colonialism and even Serena Williams – as a gospel. It is written in the fabric and seams.

The result, sweatshirts with stained glass windows cut into the body and stretches a few dresses with the same complex surface treatment, this country may be the closest thing to truly original American couture.