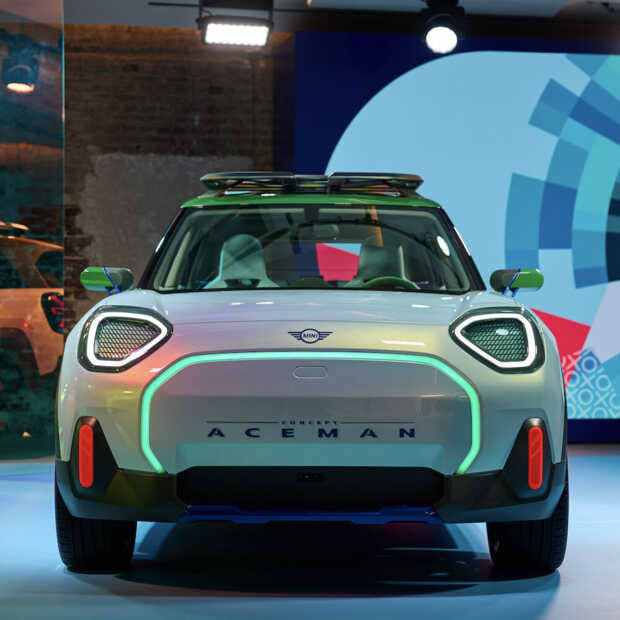 The time has come, yesterday Mini presented the MINI Concept Aceman at a well-hidden location in Düsseldorf. A new concept for a compact, uncompromising and all-electric crossover. From the first moment you will be surprised by the powerful appearance of the MINI, which foreshadows the new generation of MINI.

Every time, Adrian van Hooydonk, top designer and design boss at BMW/MINI, and his team succeed in completely turning the design around again, explicitly and uncompromisingly, and then in such a way that you, as an unsuspecting spectator in 0, 6 seconds realize, here’s a new MINI. Whatever happens to the design, that MINI DNA always remains. It is what gives the brand its own identity and has been for decades. It is a unique phenomenon in the automotive world.

The Minimalist Design Language of the MINI Aceman

It is a trend in the design world, minimalism and now also deeply rooted in the automotive industry, and even more so when it is linked to sustainability. The question is, how far can you take a MINImalistic design language. The MINI Concept Aceman seems to be the new manual for this, because in addition to a 100% electric drive, the main feature of this Aceman is minimalism in all facets of the car. This is combined in the new MINI with a new digital interior without the use of chrome and leather. It looks surprising, has a sleek appearance and its simplicity makes accents stand out even more. He also seems to have ridden off the design table. This MINI Concept Aceman looks like a sketch but in 3D.

This is what you promise, so live up to your own reality

This should be the concept for all future MINIs between the 3-door and the Countryman and always fully electric. When you see it, you actually hope they take it into production 1:1. The concept becomes reality, without concessions, this is what you promise MINI, then live up to your own reality.

The interior redesigned or not completely

The word minimalism is especially meaningful when we take a look at the interior of the MINI Concept Aceman. New shapes and carefully chosen colors, together with the well-known round dashboard of the Aceman, form a refreshing whole. It is a nod to the first classic MINI when MINI was still mini. That first 1959 model had an interior that included nothing more than the seats, steering wheel, and gear lever except a centrally located round speedometer and a row of switches. Behold the Aceman here, although the gear lever is now also gone.

Through the large glass roof you have a view of the roof rack with the shapes of the Union Jack. This roof rack does have a major impact on the looks, which must have been a conscious choice.

In the Aceman, the control of almost all functions is integrated in the round OLED display. Below that you will find a row of retro toggle switches. Switches are still there for operating the handbrake, the drive and the gears, the Experience Modes and the audio system. Depending on their function, the switches have a rotary or a rocker switch and are intuitive to operate.

Chrome and leather are gone

The color contrasts in the concept model clearly indicate that the time of boring neutral basic colors will also disappear. Most striking is the special steering wheel that is laminated with dark green velour, which really offers a different experience.

There is another striking new element to this MINI Concept Aceman, the welcome scenario. I admit that is a bit of a swallow, but future users of the Aceman are welcomed in a special way. Before departure you will be welcomed with a show of light and sound. The headlamps, the illuminated grille edge, the central interface and the projections work together for a particularly welcome scenario. There is so much happening that we have just copied the text below from MINI. Say Cheese to MINI…

As soon as someone approaches the MINI Concept Aceman, the lights come on and get brighter as the person gets closer. At the same time, the front and rear speakers create interactive sounds. When the car is unlocked, the LED Matrix lighting in the grille glows in the shape of the Union Jack. At the same time, the edge of the grille lights up and the right headlight gives a ‘wink’. The animation is accompanied by a four-tone sound that symbolizes the name MINI.

But that’s not enough, as opening the door projects a colorful image onto the floor and a burst of color appears on the central interface, which is also projected onto the headliner, dashboard and door trim. Finally, the warm greeting ‘Hey friend’ appears on the display, again accompanied by matching sounds of voices and music, as if you are being welcomed by friends at a party. It is not known whether you can also turn off this feast.

The stage for the official introduction of the MINI Concept Aceman this time is not one of the well-known car shows somewhere in the world, but will take place during Gamescom 2022 in Cologne. It is the largest international gathering for game developers, fans of computer games and esports. Gamescom and will be held from 23 to 28 August 2022 in the well-known Köln Messe. The event kicks off on August 23 via a live stream.

Anyone who understands anything about gaming and the impact and reach of Esports will understand this choice. You can honestly not think of a bigger stage. Well done MINI, things are changing.