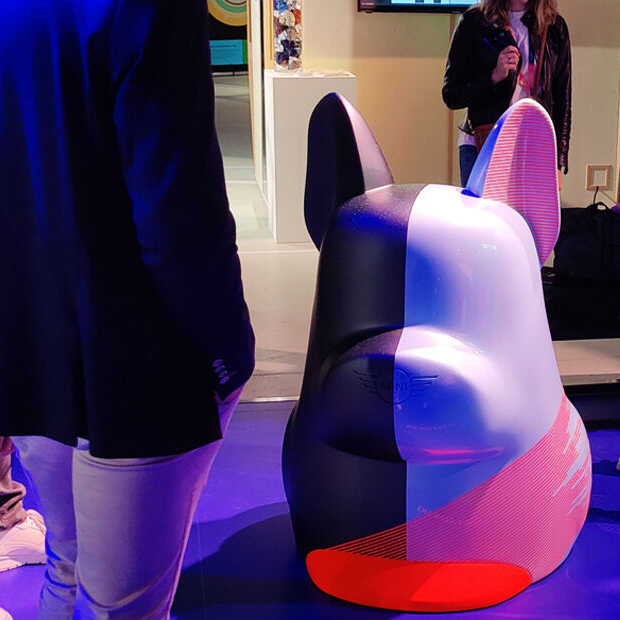 Car brand MINI has a busy stand at the Dutch Design Week. A new car? No. A tuned car? Also not. Not even a car at all. The brand wants to make its mascot Spike big and takes that very literally for the artistic event. It introduced life-sized Spike art toys.

Several art toys of Spike have been made. Spike is the bulldog that stands for MINI: an English brand whose cars are also quite square on their tires, as if they have the same attitude as that breed of dog. MINI has a large booth at the event, which will run from October 22 to 30. Several designers have worked on their own vision of the dog and visitors can too. There are several columns with tablets on which you can design your own Spike in a funny MS Paint-like way. Then you send it in and you could possibly win a trip to a big car event or a weekend driving in an electric MINI.

You can experience the latter at Dutch Design Week anyway. This year, MINI is once again associated with the event as a mobility partner. This means that Eindhoven is invested with MINIs. Visitors can take a seat for free to drive from one location to another and see all the works of art and inventions. Very handy, but also real eye-catchers: every MINI has a different work of art on the roof, which clearly states where you can find it on the floor.

It’s well worth getting on the floor for more than just admiring Spike. For example, there is an eye-catching orange electric motorcycle with sidecar, a light project where you can recharge your senses with artificial sunlight and there are also all kinds of experiences that you can have: taking a chew test, learning more about what we can do for a more sustainable earth and even the very special design of the self-driving car Edag Citybot in real life.

We understand why MINI was chosen to organize transport during Dutch Design Week. Sustainability is a very big theme within DDW and MINI as part of the BMW Group is the most sustainable car manufacturer in the world. You can therefore take a seat in Eindhoven in both a fully electric MINI Electric and the plug-in hybrid MINI Countryman. There are 120 locations, so there’s a good chance you’ll take a ride in both MINIs. So there is no car at all on the MINI stand, but that is not surprising. The company wants to be more than just a brand. It’s been using Spike for that for a while now.

For example, the dog is part of the Miniverse, an answer to the metaverse. The brand is also thinking about having the dog appear more in the cars themselves, but also, for example, to make an NFT of the art toys that can be admired at Dutch Design Week. As a car brand, it therefore takes many steps in the direction of lifestyle.

It was not without reason that a Countryman could be found at Gamescom this year: a much-photographed location, because the MINI Concept Aceman was not simply placed on a rotating platform, but was placed in a kind of toy packaging. For example, MINI is increasingly looking for non-traditional ways to show itself.

Funnily enough, it fits. At first you think: what does an English car brand have with Dutch Design Week? However, if you come face to face with Spike, after you have walked past a row of MINIs with art on top just in front of the Klokgebouw, then it fits perfectly. It is not for nothing that BIG LOVE is written on the stand in neon letters. It is the flag under which the brand aims to propagate its ingenuity and optimism towards a sustainable future for the planet.

Fits very well with the ideas that artists share about their idea for a better future. The creativity, the opportunity to challenge people to look at something in a different way and the shared love to do so with smartly designed objects and concepts: it all comes together in the Klokgebouw during Dutch Design Week. You can still go there, because the week lasts until October 30. Lots of fun!