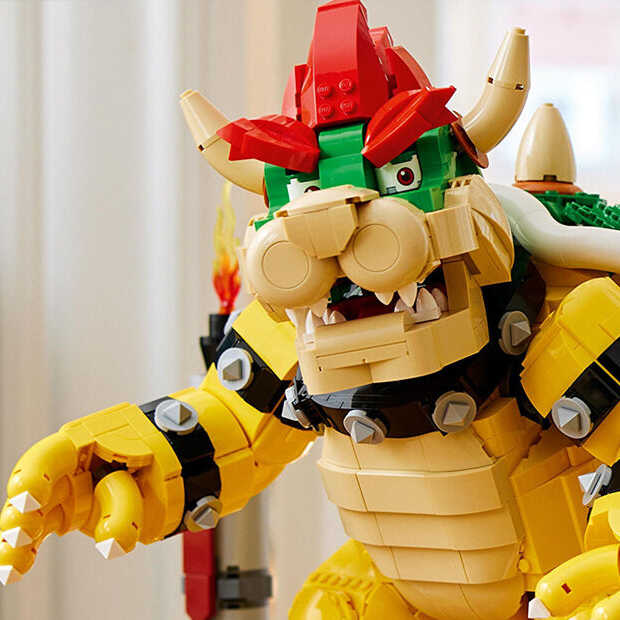 He is big, he is mighty and he can even move. LEGO has announced a new set in collaboration with Nintendo: Bowser. It’s not the largest or most expensive LEGO set ever, but it is in the Nintendo series.

Impressive LEGO sets regularly pass by, but until now the LEGO Super Mario series was not quite collectable. It was mainly a toy that allowed children to recreate the Mario games. However, we now have to come back from that completely. LEGO has announced a set that is an instant wannahave for fans of the Nintendo series.

Bowser has been Mario’s worst enemy from the very beginning. No one knows exactly what he is: a turtle, a lizard, a dinosaur or a dragon. Officially, he is a turtle-like, a Koopa. The LEGO set consists of 2807 bricks and costs 229.99 euros.

That is a considerable amount for a set in this series: normally the LEGO Mario sets are well under a hundred euros, but the big final boss is clearly there for a price that better suits a final boss. Moreover, it is not just a set that you build and that’s it. You can also move it. There are buttons on the side that let you move him and it is possible to open his mouth or shoot a fireball.

The coolest thing, though, is the jumping. When you pick up Bowser, you will see his feet move along. In any case, the video below is worth watching: you can see how lifelike this Bowser is. It will therefore not be a very easy set to build, because it consists of many parts to make Bowser move as we know him from the Mario games. In addition, there are also all kinds of stones that are completely new to box that movement for each other. The set is called The Mighty Bowser in English and bears number 71411.

You can use Bowser in the interactive game LEGO Super Mario. There are two towers that Bowser can completely collapse, there is a POW block hidden in them and there is an Action Tag. This set is made to combine with other sets in the series, so you can pit our plumber friend Mario against his nemesis. Be warned, he looks even smaller when he’s in front of that gigantic Merchant King.

However, that is not necessarily necessary: ​​this set would not look out of place in a display cabinet. This way you can position Bowser exactly as you want: you can adjust the position of his arms, but also of his hands, legs and tail. There is also a holder in which you can place the 32 centimeter high colossus. LEGO Bowser will be released on October 1.