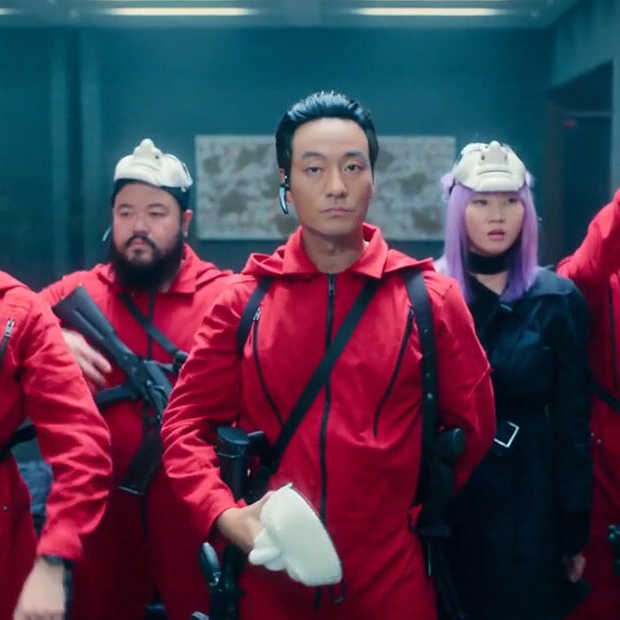 La Casa de Papel: Korea is now available on Netflix. Perhaps a somewhat confusing title, because La Casa de Papel is so inextricably linked to Spain. Plus, when we think of the streaming service and Korea, we quickly arrive at Squid Game. Still, it’s not a joke or anything crazy: it’s a completely new season of La Casa de Papel.

We all saw how it ended after five seasons with our Spanish friends from La Casa de Papel. As much as we’re going to miss the Professor, Tokyo, Helsinki, Denver and co, creator Alex Pina has said that’s really it for the series. At least, when it comes to the Spanish variant. Spin-offs are being worked on and this new Korea-Casa de Papel is the result of that.

One of the biggest drivers behind the quality of Money Heist, as the series is called in English, is that creator. Alex Pina rewrote the ending of the Spanish series 33 times to make sure it was absolutely perfect. Moreover, it also stopped at a good time: it became such a hype that in 2018 it was even the most watched foreign series on the streaming service.

It is also a huge hit in the Netherlands. Street musicians regularly play Bella Ciao, at Carnival it has suddenly become very normal to wear a Dali mask and red overalls and on holiday we are now suddenly able to order a beer in Spanish. There is even a bit of the Netherlands in La Casa de Papel: it comes in the form of security guard Hans. He is played by Maarten Dannenberg.

A good influence, then, that Netflix hit, which we will hopefully also see in the Korean version. Although the reviews are both positive and negative, the question is whether it can become such a hype again. The series looks very much like the original, which has stopped at its peak for a reason. It is therefore questionable whether the Korea series brings something else to the table, in addition to the switch from Dali masks to Hahoe masks. The director is Kim Sung-ho and in total it is 12 episodes, the first six of which are now on the Red N.

La Casa de Papel: Korea revolves around professional criminals set in the fictional Joint Economic Area in Korea. Of course there is another heist and there is even a new professor played by Yoo Ji-tae. In addition, the entire crew again has a well-known metropolis as a code name. That Joint Economic Area is interesting, by the way, because in this world North Korea and South Korea are about to reunite and they want to make a common currency together. And of course our new favorite career criminals are only too happy to steal them.

In any case, the first episode will be very positively received on the web, which is mainly because it contains a song from the Korean boy band BTS. Since they have quite a large group of fans (an entire army even), this series is already a hot topic on social media even without extensive reviews. However, that could hardly be otherwise without BTS: not only music by BTS, but also the success of, for example, Squid Game and the awarding of an Oscar to a Korean film (Parasite, in 2019) shows that we as a world are increasingly looking at Korea. as a trendsetter.

Now let’s see if Money Heist: Korea can live up to it not only in popularity, but also in quality. Hopefully it can continue the trend that started in Spain years ago. If one country can do that right now, it is Korea.