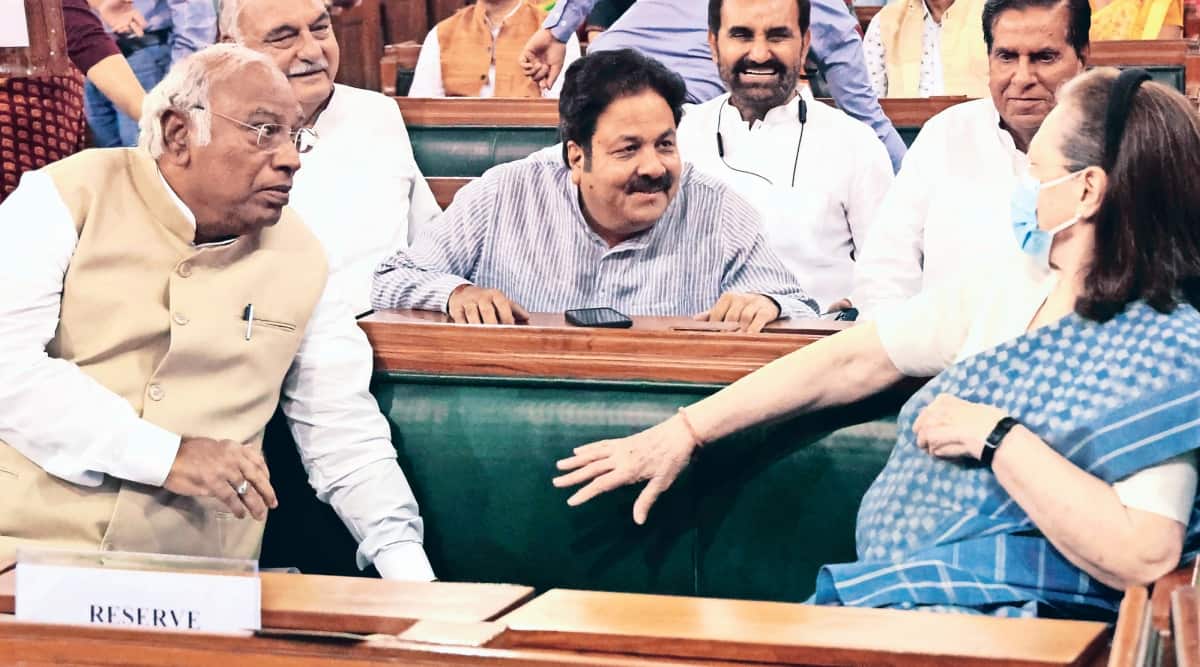 Launching his campaign for Congress president, Rajya Sabha MP and party veteran Mallikarjun Kharge on Sunday said he is “everyone’s candidate” and revealed that he had told his rival and Lok Sabha MP Shashi Tharoor that it would be better if one person emerged. Consensus name for the post. Tharoor, he said, replied that democracy should be fought. “I said okay.”

Kharg’s comments are interesting as Tharoor quoted Congress president Sonia Gandhi and Rahul Gandhi as telling him that “a democratic contest will only strengthen the party”. The party also framed the contest as an example of vibrant internal party democracy which, it insisted, was absent in other parties.

At the same time, addressing a press conference at his Rajaji Marg residence in Delhi, Kharge said the perception that he was an establishment candidate was wrong. Calling Tharoor his younger brother, Kharge said he did not enter the polls to oppose anyone but to bring his “ideas” to the party and strengthen it and the Congress ideology.

Kharge, who launched his campaign on the birth anniversaries of Mahatma Gandhi and Lal Bahadur Shastri, plans to visit several key states in the coming days to vote for PCC delegates who will vote in the Congress presidential election.

AICC general secretary communication in-charge Jairam Ramesh and AICC general secretary Saktisingh Gohil were at Kharge’s residence when he started his campaign, they did not join him on stage to show neutrality. The three national spokespersons of the party who were on stage – Dipender Hooda, Syed Nasir Hussain and Gaurav Vallabh – announced at the start of the press conference that they had resigned from their posts to coordinate Kharg’s campaign.

Asked about the notion that he was a “private official candidate”, Kharge said: “Many of our leaders, senior and young leaders, people in the state told me that when there is no candidate from the Gandhi family, they don’t want to contest… your fight. Should do… The courage they gave me, the encouragement they gave, unke kehne par mein election lad raha hoon (I am contesting at their behest),” he said.

Kharg said many leaders requested him over phone and even in person, offering all cooperation in the absence of a Gandhi family member. He mentioned that all the senior leaders came out in support of him on the day of submission of nominations.

He also mentioned that those campaigning for him would leave the party posts for the time being. “So the perception that is being created… that he has the support of these people, the people… of course I have the support of the people, the leaders. Dispel this (misconception)… Hum sabi ke candidate hai, sabi log humen support (I am everyone’s candidate, everyone supports me).

Asked whether he would ask Tharoor to withdraw, Kharg said: “It is up to him. I can’t force anyone. He called to congratulate me. I thanked him but said it would be better if a man emerged as a consensus candidate. In response, he said that there should be a fight in democracy, that’s why he is fighting. I said ok. When a candidate decides to run, how can I stop him? So he is fighting. He is my younger brother. This is an internal matter. Everyone has to work together today and tomorrow.”

Whether senior G-23 leaders’ support for him means their grievances have been addressed, Kharge said: “Don’t associate it with that. Now there is no G-23. All those people are working unitedly… They want to save the party, stay united and fight BJP/RSS unitedly. So they are with me.”

Asked about Tharoor’s comments that Kharge was a candidate for continuity and status quo, the veteran leader said: “He (Tharroor) may have his opinion… The status quo or reform (point) he is talking about will be determined by the 9,300-odd. Delegates (who will vote), and then a committee will be formed (Congress Working Committee)… the changes that will be made in the party, the committees that will be formed and the policies that will be formulated, everything will happen. It will be agreed upon by all and we will implement it. It will not be done by one person. The key word for me is ‘hum (we)’ instead of ‘main (me)’. We will take decisions together, and wherever there is error, we will take action,” he said.

On the role of the Gandhi family, Kharge said that if he were to head the party, he would consult them as well as other senior leaders and implement their good suggestions. “I will definitely consult them… but that doesn’t mean I haven’t learned anything in 50 years,” he said.

Calling working for the party a full-time job and not a part-time one, Kharge said: “I am working full-time. If I enter the Parliament (building) in the morning, I get up in the evening… My habit is to work earnestly in whatever responsibility I take.