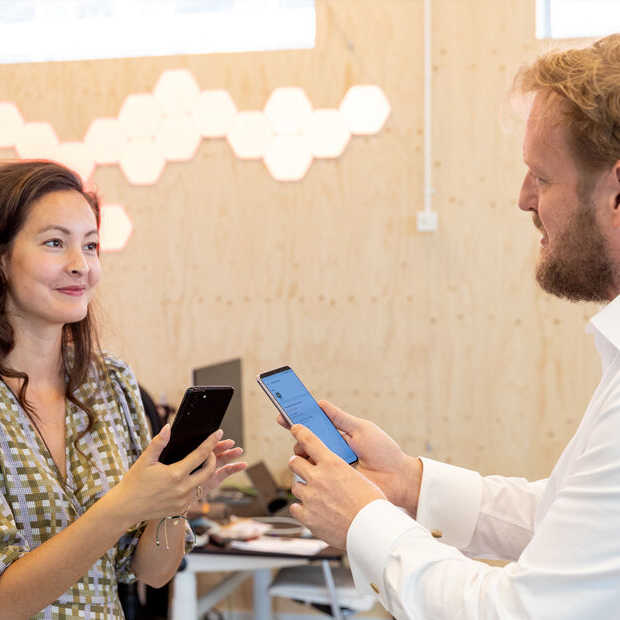 You will soon be able to make payments by pointing your smartphone at someone. The bank ING, together with chip maker NXP and Samsung, has developed NEAR, a method whereby sending payment requests and exchanging data is no longer necessary.

ING announces that it has developed the method to make it easier to make fast payments. This does not only apply to splitting a restaurant bill, but also, for example, to the collection box or if you want to buy something at a flea market or on Marktplaats. It is no longer necessary to have any information about anyone: no phone numbers, bank details or usernames. You just have to point.

There is a catch, because pointing alone won’t get you there. That other person also needs a smartphone, because that’s what happens: via ultra-broadband technology on the new generation of Samsungs, you can point your phones at each other and transfer money. Within the ING Banking app, you first select the person who is close to you (physically). You will then see the distance to that person in the app, enter the amount to be transferred and confirm this. The recipient then sees that you have paid something, which all works via UWB technology.

Chipmaker NXP says: “The pilot will use NXP’s Trimension SR100T ultra-wideband chips together with UWB-enabled Samsung smartphones, making it possible for consumers to pay directly via the ING banking app. As the need for convenient peer-to-peer payments continues to grow, we are innovating together with ING and Samsung to make this new payment method suitable for worldwide application.”

This collaboration is important, because each company is strong in its own field. Samsung did have to give ING and NXP access to its devices. They have been equipped with UWB since Galaxy Note 20 Utra, so that there are now three Samsungs that can use NEAR: Note 20 Ultra, Galaxy 21 Ultra and Galaxy S22+ Ultra. However, UWB technology is also used by Apple, so we can imagine that Apple customers won’t have to wait too long once the time comes.

UWB has been around since World War II, when it was used by the US military. UWB stands for ultra wideband and is known for being able to transmit large amounts of data at lightning speed via pulses. This way they can even use a frequency where there is already activity. Pulsing is important, because UWB has to work for a very short time.

This is partly for safety: the biggest concern with UWB is that interference, so that often only UWB with a low power may be used. That is fine for this ING project, however: that low power means that you can use UWB ‘only’ tens of meters away. The advantage is that UWB is less bothered by obstacles such as walls than Bluetooth and WiFi.

Paying by pointing to ING is currently still a pilot, of which a larger test will follow in the second half of the year.