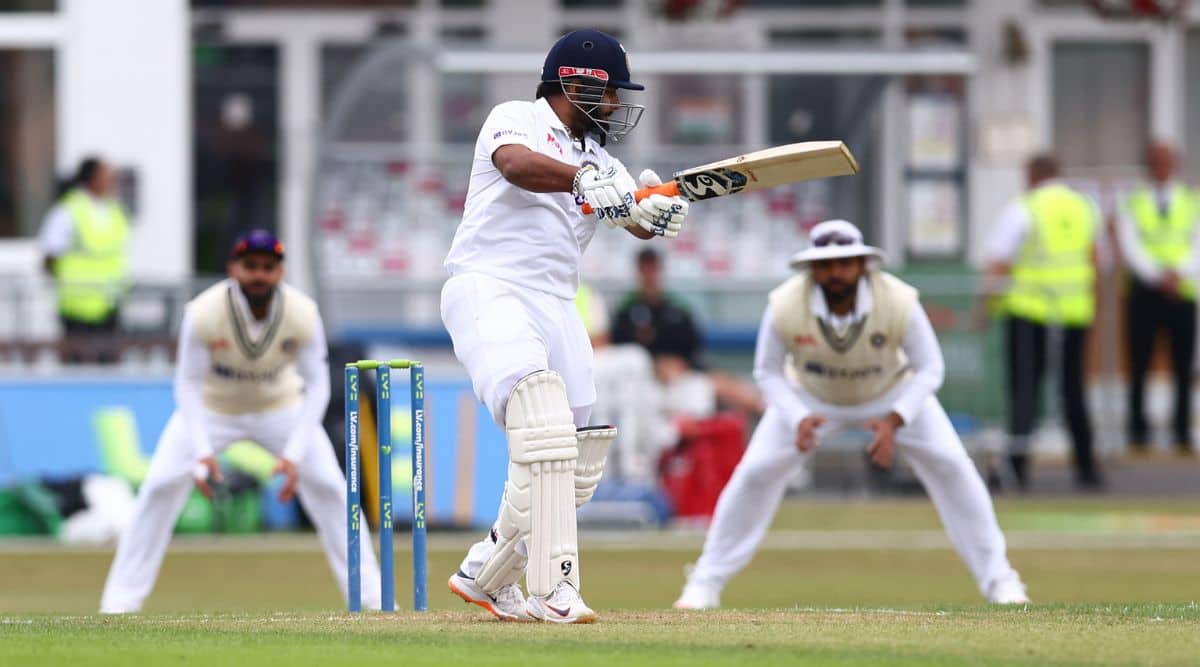 To his lengthening reel of mind-spinning strokes, those that inhabit a space between the glorious and ridiculous, Rishabh Pant added another in the warm-up game between Indians and Leicestershire. Umesh Yadav had just about veered a full ball onto Pant’s leg stump. Pant was already on bended knees, premeditating a sweep, or perhaps a scoop. But instead, he flicked the ball for a six over deep square leg from a sweeping posture, his back-knee on the ground and front knee bent, the body swaying a fraction towards his left, leaving both Yadav and the audience agape.

These are the strokes that embellish the legend of Pant. Instantly flickers and flashes through your mind the reverse-lapped four over the slip cordon off James Anderson, or the reverse-swept four off Jofra Archer over the gully, or his trademark pulls, wherein his body is arching so much backwards that he looks as imbalanced as a child who is learning to balance his cycle, or the charge down the track to tearaways, or the paddle-sweeps. In mood, he could hit any ball through any part of the ground with any stroke he likes.

These, though, are the same strokes that dis-embellish him too, in that he is hastily judged on the outrageousness of these strokes. As if every stroke he unleashes is of this unreal nature. As if he’s all about just unfurling unusual shots and fetching the ball to unusual corners of the ground, as if he is just about blind daring and derring-do. But such a perception is gloriously understating the genius of Pant’s batting, and deflecting away from his real qualities. Often the part is misconstructed as the whole.

For, he is much more than an adrenaline-fuelled see-ball-hit-ball destroyer of a cricket ball. There are deeper layers and different shades to his batting. Dissect any of his top Test knocks, a distinctly obvious pattern emerges. He bides his time, shrewdly gauges the pitch, bowlers and the mood of the match, before processes his plans, where to hit, when to hit and how to hit.

For instance, during his hundred against England in Ahmedabad, he soaked 82 watchful balls to reach his half-century but needed just 33 more to reach his century. One can’t be scoring hundreds in Australia, England and South Africa relying solely on attacking guts.

The eighty-seven ball 76 against Indians, the highest score from either side so far, was forged in a characteristically Pant fashion. He began carefully, much like orthodox batsmen do, respecting conditions and playing the ball to its merit. The scorecard, as often is the case, sketches the faintest of an accurate picture. He struck a four of the fifth ball, but only when Shardul Thakur had erred on the shorter side. He would hit a bad ball at any time of his innings. But the good balls were left alone, if those were beyond his reach, or resolutely defended.

There were times when both Siraj and Mohammed Shami tested his discretion outside the off-stump. But apart from a stray attempt to hammer Shami down the ground, skipping down the track, he was restrained in the early exchanges. Instead, he managed to rattle Shami, as he pulled his length back immediately. Pant duly cut him behind point, taking the ball from almost his body, a tell-tale sign that he was playing the ball late. He eventually looted 26 runs off 30 balls from the day’s sharpest bowler.
Interestingly, his most productive shot was the extra cover drive, but only when the ball was full enough to be driven. He didn’t stretch out but leant into the drives. Pant is a happy driver of the ball, but his classical side is often overshadowed by his daring side.

There were quiet periods too. There were two separate phases wherein he eked out a single off 10 balls. Off the first 72 balls, he scored 45. Of the next 15, he reeled out 31. That was classical Pant, and a plan of action forced by the fall of wickets around him. At one junction, the Indians were 71/4, Siraj and Shami sharing two wickets apiece. They soon slipped to 129/5. It was then that Pant began to produce his adventurous side — the six off Yadav was followed by a slap through point and a short-arm front-foot flick off Siraj. This wasn’t chancy hitting, rather an intelligently constructed innings for both the conditions and the situation. And he alone ferried Leicestershire within two runs of the Indians’ total.

Just as he seemed hurtling towards a hundred, he mistimed a slog to mid-on off Ravindra Jadeja. An infuriating fashion to get out, but that’s in the Pant package, even the ungainliness of the shot would have the same audience tearing their hair in anger. Just as a stone-waller could get out defending, an attacking batsman could perish playing an attacking stroke. But those have been strokes that have condemned him to a pool of criticism. He might not yet be a complete player, there are flaws to be pressed out, his white-ball cricket is a study in progress, but there’s little doubt that he is India’s best wicket-keeper batsman in red-ball cricket. Bharat, in Indians’ second innings total of eighty one, contributed 31 runs, taking his match tally to 101 runs without getting out. But he seems eons from displacing Pant.

He gets a hug from Jadeja & high fives from his @BCCI teammates.

There is a subtext of paradox too—the second-most famous product of the IPL (after Jasprit Bumrah) is more attuned to the riffs of Test cricket than T20s or even ODIs. And to completely understand his game or to measure the depth of his genius, you need to watch (and read) him between those strokes of an unreal nature and those dismissals that slip you down a stream of rage.