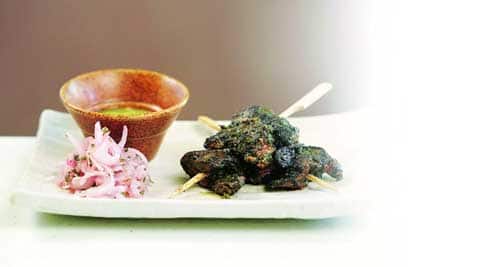 Lima is Chef Atul Kochhar’s latest test, the previous one at his restaurant NRI (not really Indian), also in BKC. Visiting Lima is a unique experience, one of the only restaurants in Mumbai that specializes in South American cuisine. Although we thought some of the food tastes weird, we appreciate the innovation, creativity and thought that has gone into each of them.

But perhaps a lounge bar, rather than a restaurant, would better describe Lima. It has only 17 items on its food menu but it also offers many more signature drinks, with music in samba, tango and salsa medals. A green roof and bright blue bars glow with natural light.

The best thing about food is that it is a cultural experience. One might be surprised to find a dish called Gochujang Honey Chicken under the Churasco Grill Department, but Chef Atul explains that the migration of Koreans to Latin America after World War II influenced his regional cuisine. The chicken, aji mirasol was marinated with pepper and then fried, was juicy, and gochujang, which is a spicy and spicy paste made from pepper and soybeans, added an unexpected kick.

The Churrasco Grill also has a slightly weird-tasting milk infused corn on the cob. Coriander leaves do not go well with sour yogurt corn sweets. The chimpanzee chicken liver also fell flat, but that’s probably because we don’t like liver. We appreciated the taste of chimpanzee, though, as it is an Argentine sauce made with parsley and garlic and used for grilling.

Our next stop was quesadilla, a dish found on the menu of every self-respecting restaurant with Latin food. In Lima, it brought black beans, corn, bell peppers and Manchego cheese. We were a bit disappointed to see how common it was, but most other foods were revelations.

For example, Indian Sea Bus Seviche. A savory, a seafood from the coastal region of Latin America, is usually made from fresh raw fish cured in citrus juice and seasoned with aji or chili peppers. The dishes we served were delicate – balanced, fresh and flavorful.

Other ceviche was re-imagined for vegetarian customers and was made from five types of mushrooms, most of which are found in Asia and not South America. Interestingly, instead of replacing the sauce found in ordinary savory, the chef decided to use Japanese panju sauce. Also citrus-based, it is enough as a dressing in Sevich but more suitable for the taste of these mushrooms.

Another delicacy was multicolored quinoa and mint, topped with a delicious sour-sweet passion fruit dressing. Quinoa, originally from the Andes, is usually white. The black and red quinoa, while adding a little flavor, turned the dish into an art form – a good example of the thought that went into the presentation of each item.

Lima is a risk; Food will be outside the comfort zone of most people. But perhaps delicious drinks will give comfort to the customers Our favorites were kumkat and basil kipirinha, although watermelon mojito, which is self-explanatory, and a volcano made with rum, pineapple juice and a burnt orange peel were also good. .
Rising prices, relatively small portions and unfamiliar foods can turn some people off. Vegetarians should also be careful. But if you want a warm environment, fresh drinks and want to try something new, go