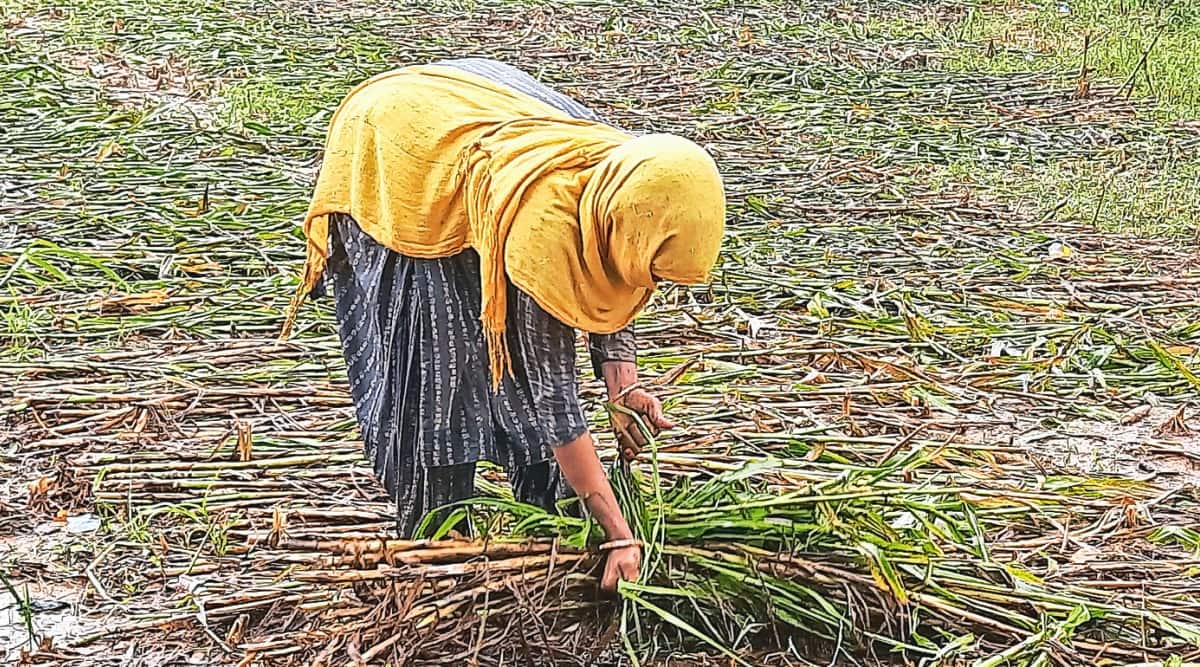 Soaked from head to toe, Rabina, a marginal farmer and cattle herder, continued to collect kadvi (millet straw) from the soaked fields on Saturday, September 24, even amid incessant rain in her village Udhanwas in Rajasthan’s Alwar district. Thirteen kilometers away at Tapukara, the gauge station recorded 91 mm of rain, the highest single-day rainfall this season.

“Nuksaan ghano ho gayo (the damage is too much),” said Robina, pointing to the millet stubble lying in the wet field.

For 34-year-old Rabina, who runs a family of seven, the main source of income is cattle — she has two buffaloes. He is now worried about providing fodder for his buffaloes as the millet crop, from which he expected to get at least 10 mana kutti (or four quintals of straw), has been damaged by the rains.

Rising fodder prices have put a huge burden on farming families, especially with late and heavy monsoons causing massive crop losses and outbreaks of lumpy skin disease in 15 states that have killed nearly one lakh cattle and affected another 20 lakh. .

Rahisan, 52, who lives in nearby Kulawat village in Alwar district and owns 12 cows, two buffaloes and a goat, highlighted the irony of food and fodder prices. “Anaaz ke bhav hai (The price of fodder is almost at par with grains),” he said when asked about fodder prices. The price of wheat this year is Rs 2,200 per quintal, he said, and compared the price he paid – Rs 800 per 40 kg – for dry fodder or Rs 2,000 per quintal.

Not only dry fodder, feed (khal or chuni) prices have also increased sharply, Rahisan said, adding that mustard oil cake which was priced at Rs 1,600 per quintal now costs around Rs 3,000 per quintal. The millet crop cultivated on his family’s four bighas (about 2.5 acres) was also damaged by the heavy rains like many others.

Isha Mohammad, a resident of Muradbas village in Haryana’s Nuh district, said the price of fodder has doubled to Rs 700 per 40 kg in a year. Also, the price of green fodder (sorghum) was also higher by Rs 20,000 per acre, he said. Officials of Alwar and Nuh districts have acknowledged the sharp rise in fodder prices this year and its adverse impact on the local population. Dr Narendra Kumar, Deputy Director, Animal Husbandry, Nuh, said as per the 20th Livestock Census, the district has about 33,000 cattle and 1.75 lakh buffaloes, more than 90 percent of the families in the district depend on animal husbandry and agriculture for their livelihood. .

The rise in fodder prices has had a direct impact on milk prices as well. When the Amul maker, the Gujarat Cooperative Milk Marketing Federation (GCMMF), decided to increase the retail milk prices in August this year, it was because of the high cost of cattle feed. “Cattle feed costs alone have increased by around 20 per cent over last year…,” it said in a statement.

But higher milk prices don’t mean much to people like 60-year-old Yasin of Udhanbas. Due to sharp increase in the price of dry fodder (dried residues of crops like wheat, paddy, sorghum, barley, sorghum, gram, etc.), even on rainy days he goes out to graze his 15 animals including cows and buffaloes. . He cultivates two-three bighas and rearing cattle is his main source of income. “700 rupees man bik raho hai charo, first 200 rupees man tha. Ab mil hi na raho… dudh vahi mando hai. 25 rupees kilo dudh par bache hi ki hai (Wheat straw Rs 700 per 40 kg. Earlier it was Rs 200 per 40 kg. Now even that is not available. Milk price is also low. Milk is sold at Rs 25 per kg. We have no savings, Yasin said.

According to the National Statistical Office report ‘Household Agricultural Households and Land and Livestock Holdings in Rural India, 2019’, a total of 17.24 crore (48.5 per cent of rural households or approximately 8.37 crore) ‘milk’ cattle during July-December 2018, Reported as having young cattle and cattle in the ‘other’ category. Further, 43.8 percent of the total 9.3 crore agricultural households use green fodder, 52.4 percent dry fodder, 30.4 percent concentrate, and 12.5 percent other animal fodder periods.

Dairy industry sources said dry fodder (wheat straw) was being sold at Rs 15-16 per kg in various parts of Rajasthan and Uttar Pradesh and was significantly higher than last year’s price. “There is a 12-15 percent shortage of green fodder and 25-26 percent of dry fodder in the country. One of the reasons for the shortage is that paddy and wheat straw are not fully converted into good quality fodder. In many parts of the country, farmers burn straw, leading to further shortages,” Amresh Chandra, director of the Indian Grassland and Fodder Research Institute in Jhansi, told The Indian Express.

The central government is not unaware of the fodder crisis. Union Agriculture Minister Narendra Singh Tomar highlighted the need to ensure food availability. “Kuch sankat khade ho rahe hai, jisme pradhan roop se hum pahange toh dhyan me ayega ki ana wala kal chare ka sankat khada karta hai (There is some crisis on the horizon… fodder shortage is the main one),” he told the World in Greater Noida on September 14. Addressing the Dairy Summit “There is a need to think seriously about how to get enough fodder in the future…,” he said