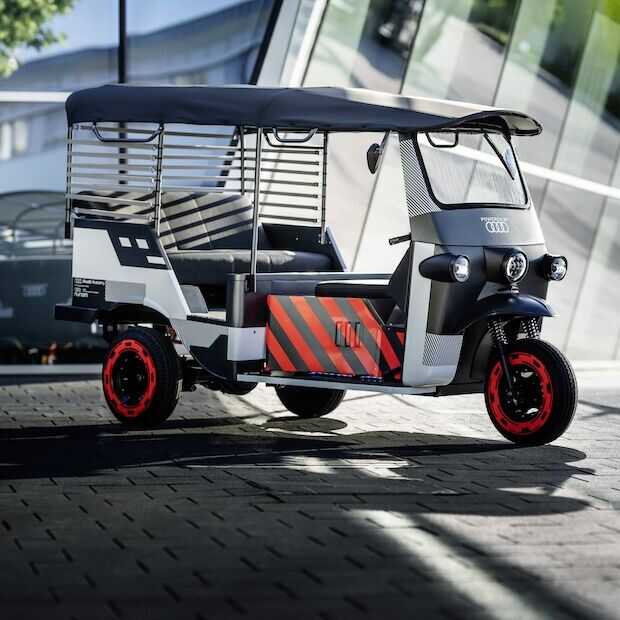 What to do with old EV batteries? Well, in addition to recycling, there are already various solutions for that. Old Tesla batteries are used as a ‘buffer’ for solar panels, so that you can also use your own generated green energy during the night and dark days. Audi has cooperated with a special project for India. The German car manufacturer is making a number of old batteries from Audi EVs available to a German-Indian startup Numan. They build electrically powered rickshaws for the Indian market.

The idea behind this project should be clear. Giving the old batteries that are no longer suitable for an E-tron a second life. For vehicles with limited power and range, these batteries can serve for years to come. “Car battery packs are designed to last the entire life of the car. But even after that, they still deliver a lot of their power. When properly applied, used battery modules can have a huge impact, helping people in difficult life situations earn an income and gain economic independence – all in a sustainable way,” said Prodip Chatterjee, co-founder of Nunam.

The German-Indian company, with branches in Berlin and Bangalore, has now built three electric rickshaws. Before that, they worked together with a team of Audi trainees at the Neckarsulm factory in Germany. The trainees replaced the combustion engine of the rickshaws with an electric motor and created a new subfloor that offers space for the used battery modules and is splash-proof. Moreover, recyclable materials are used as much as possible in the development of the e-rickshaws. In addition to the Audi trainees, mechatronics technicians, bodybuilders, painters and IT specialists are also involved in the project.

The rickshaws will enter India’s roads in early 2023 as part of a pilot. In addition to the reuse of old EV batteries, the initiators have another important motivation. They want to make the E-rickshaws available to women through an Indian non-profit organization with the aim of strengthening employment for this target group in India.

For example, the women can use the rickshaws to transport their goods that they want to sell in the market, without having to enlist the help of others.

An E-rickshaw prototype can be admired this week, starting today (June 22), at the GREENTECH Festival in Berlin. Visitors to the event can also take a test drive with the electrically powered, and powered by Audi, rickshaw.