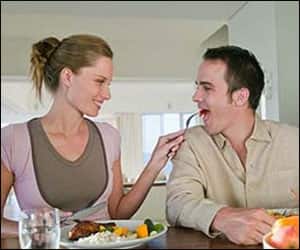 Want to stay slim? Avoid eating with skinny friends and go out with fat friends.

Researchers have found that eating out with a thin person who eats a lot causes them to eat larger portions than usual.

Sitting opposite an obese person at a meal encourages one to eat less than usual.

“Our findings indicate that the size of the person you eat with is much smaller than the size of the food they order,” said researchers from US and Canadian universities.

“If a heavy-set colleague eats a lot, you can probably adjust your behavior and eat less. But a thin friend who eats a lot can lead you to eat more than usual”, reported the Daily Mail.

Surprisingly, the portion remains the same but the size of the portion they eat depends on the person they are dining with, it has been revealed.

So if a thin person orders a large portion, their food will accompany them and they will tend to finish what is on their plate.

If a fat diner orders a large portion, so will their friend, but the friend won’t necessarily eat it all, the study found.

More than 200 student volunteers were paired with a researcher at a movie screening and tested.

The results, published in the Journal of Consumer Research, show that the choices made by 210 volunteers were greatly influenced by what the researchers ate.

“Most participants took a portion that the researcher served himself.

“However, it was clear that … how much they ate depended on whether their partner was thin or obese,” the study found.