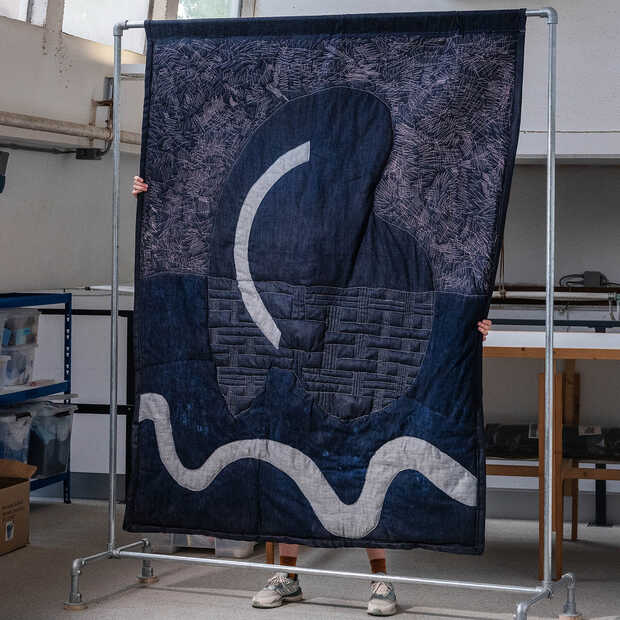 Earlier this year, G-Star RAW successfully launched the new art platform The Art of RAW. The denim brand, which is also fully engaged in sustainability, works together with various international design talents to shape their shared passion for craftsmanship with denim as a starting point.

After the kick-off with designer Teun Zwets, it is now the turn of the talented Greek designer Athena Gronti.

Athena Gronti (1993) is the second design talent to give free rein to her creativity for The Art of RAW. Athena comes from Athens (Greece) and combines different disciplines such as photography and illustration in her work. But it wasn’t until she experimented with textiles that she realized it was the ideal material for her. Textiles have sentimental value to the designer because her grandmother was a seamstress and always embroidered and sewed during her childhood. Although she was not aware of it at the time, it turned out to be an important part of her upbringing and future as a designer.

For The Art of RAW Athena created under the name Ariadne’s Thread a special denim quilt. She did intensive research into the history and sociological aspects of denim, resulting in a quilt in which the different faces of the fabric can be seen. From roughened areas to soft, refined areas: Ariadne’s Thread brings the opposites together flawlessly.

The name of the work takes its inspiration from the Greek myth, in which the princess of Crete – Ariadne – helps her lover escape from a labyrinth with the help of a thread. For the designer, the name symbolizes taking and inspiring the viewer into the rich history of the material, through its own thread.

[Ariadne’s Thread] is a Greek myth. In my youth my father read all kinds of myths like fairy tales… It is a parallel that I am the person who holds the beginning of the yarn for the viewer and takes him into the rich history of the material. Denim to me is like the water of textiles. It is an inspiring material, possesses so many paradoxes and can transform into a variety of shapes and qualities. – Athena Grontic

Talents of the future

G-Star RAW continues to push creative boundaries, collaborating with promising design talents on a series of art objects, utilizing denim waste and dead stock. Every month, new collaborations are launched in which the material that is central to G-Star is recycled: denim.

In the coming year, several artistic fields will be explored: from glass art, sculpture to product design. The next collaboration is with designer Lenny Stöpp.

There is no limit to what denim can do

G-Star RAW is constantly exploring the endless possibilities of denim. Various abstract denim artworks have emerged over the years, including the raw denim tutu that was made for the Dutch National Ballet during the lockdown.

The creation of Teun Zwets.

Jeroen has been involved with Dutchcowboys for more than 15 years. Started as a content creator, and now responsible for the day-to-day business…