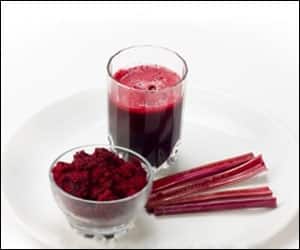 Drinking beetroot juice boosts your stamina, with a new study concluding that the magical drink can help you exercise by up to 16 percent.

Studies show that drinking beetroot juice reduces oxygen uptake to an extent that cannot be achieved by any other known means, including training.

To reach the conclusion, the research team conducted their survey with eight men between the ages of 19 and 38. They were given 500 ml of organic beetroot juice daily for six consecutive days before completing a series of tests involving cycling on an exercise bike. On another occasion, they were given a placebo of blackcurrant cordial for six consecutive days before completing the same cycling test.

After drinking the beetroot juice, the group was able to cycle for an average of 11.25 minutes, 92 seconds longer than when they were given a placebo. This would translate into an approximate 2 percent reduction in the time taken to cover a given distance. The group that consumed beetroot juice also had lower resting blood pressure.

Researchers are still unsure of the exact mechanism by which the nitrates in beetroot juice increase stamina. However, they suspect that it may reduce the oxygen consumption of exercise by converting nitrate to nitric oxide in the body.

The research is published in the Journal of Applied Physiology.