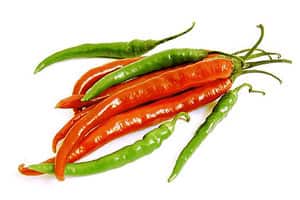 A variety of chilli, grown up to eight inches long, for a remote Naga-dominated village in Manipur’s Mahadev Hills.

Chilli with its distinctive taste and color is grown only in Sirarkhong in the interior Ukhrul district.

Known as ‘Sirarkhong Chilli’ to the people of Manipur, it has become the main source of income for the villagers, though the state government has not given any help in its cultivation.

Only some social organizations, including the ‘Self Help Group’ Federation, have provided some help.

Village head ZV Unkhayap said, “We also grow other vegetables, but chilli is the backbone of our economy.

There are 400 families in the village and a family harvest ranges from about 100 to 300 kg of chillies every six months.

The dry variety of this unique chilli is sold at Rs 200 per kg. The village produces about 5000 kg of dry chillies annually.

He lamented that the state horticulture department has failed to provide any assistance to the pepper growers despite assurances given by state horticulture minister Gaikhangam who is also a senior Naga leader from the Manipur Hills.

Horticulture department officials said the department is considering providing financial and other assistance to villagers to produce more ‘Sirarkhong pepper’.

Call it the unique soil or the village climate, the neighbors tried cultivating chillies, but failed to produce the variety.

Attempts to grow it elsewhere resulted in a short variety and lacked the sharp tang of ‘Sirakhong Chilli’.

“We celebrated the festival to showcase the role of pepper in rural life and to attract the attention of the authorities,” said Jasper Sira-nao of ‘Sirarkhong Shanao Long’ (Women’s Organization).

Village head Ungkhayap said pepper in powdered form, which is in high demand, is now exported to Ukhrul district headquarters and nearby villages, but unfortunately has yet to find a market in Imphal.