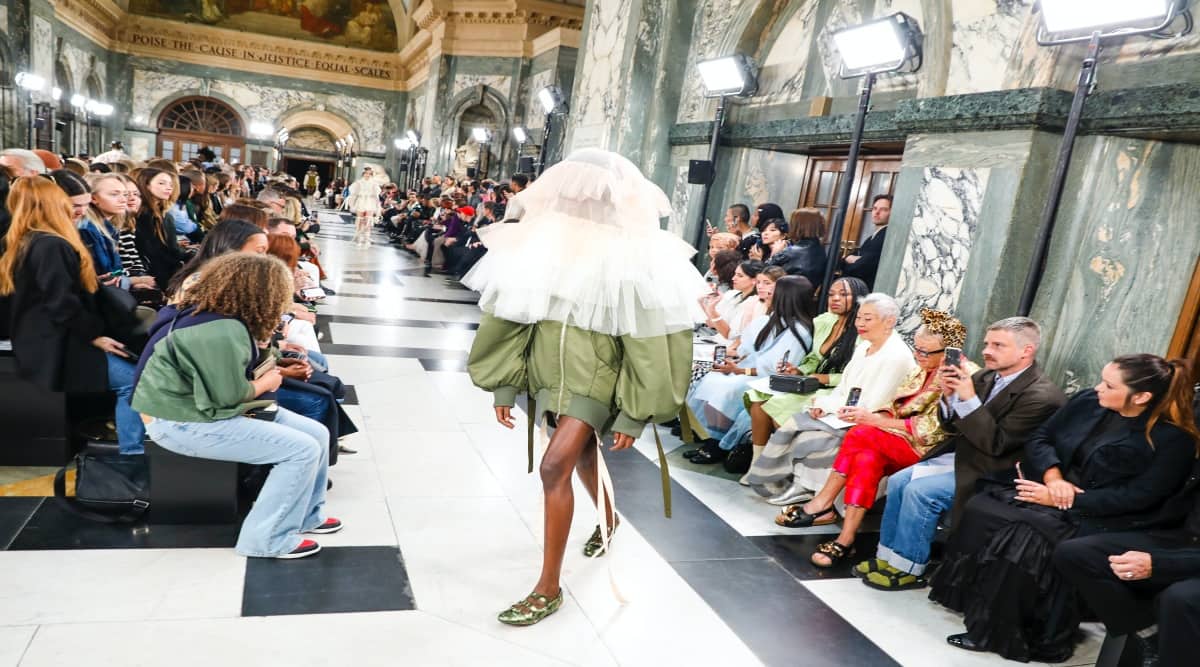 On Sunday night – the eve of Queen Elizabeth II’s funeral – queues of people waiting to pay their last respects to the late monarch stretched so far through the heart of the British capital that it could be seen from space.

Across the city, at 8pm and a planned minute’s silence silenced the nation, people waited to enter a fashion show. Some things never change.

But this season’s London Fashion Week was like no other. Britain’s longest-reigning monarch died on September 8, plunging the nation into 10 days of official mourning. With fashion shows scheduled to begin on September 15 and prominent brands such as Burberry opting out of the calendar, some wondered if fashion week would — or should — happen at all.

Beyond its penchant for forming an orderly queue, Britain is also a country whose national identity has been shaped by times of heartache and turmoil – including plenty for designers recently: Brexit and the continued fallout from the pandemic, and the prospect of recession.

After an outcry from several designers, including Harris Reid, the show went on.

“It’s been a challenging two years,” the designers, who use the pronouns they/them, said before their first runway show, a typically theatrical gender-fluid spin of voluminous crinolines and cartwheel headpieces inspired by debutante balls. “Talking to my fellow young designers, many of whom have put their entire brand budgets into the show to drive sales and brand awareness, supporting smaller brands in London is more important now than ever.”

Seasonal parties may have been canceled as a sign of respect. But Harris Reid was the first of several exuberant and determined turns from the latest crop of London’s young up-and-coming labels.

The edgy Y2K hypervixen on the runway from KNWLS, whose mesh prints, pleated miniskirts and uber-low rise flares have spawned a host of fast-fashion imitators. A punchy debut from Chopova Loena, whose dramatic pleated skirts with punky carabiner clips are now sported by industry insiders. And a special mention to Brazilian designer Caroline Vitto who showed with talent incubator Fashion East. Vitto’s barely-there creations centered on cast metal frames that highlighted fleshy folds and creases; Her use of exclusively curvy models led to her mission to celebrate aspects of a woman’s body that are often hidden from view.

Speaking of flashing flesh, Nancy Dojaka’s signature sheer splicing and intricate cutout creations provided another reminder of why she won the 2021 LVMH Prize for Young Designers. And this year’s winner, Steven Stokey Daley, captivated audiences on his SS Daley Show with an elegantly crafted fable inspired by the love affair between early 20th-century writers Violet Trefusis and Vita Sackville-West, with hints of the famous English countryside. Gardens at Sissinghurst Castle in Kent. “Rabbit” was a code word for their romance. Fluffy knitted sleeveless vests, wide-leg trousers and botanical prints feature floppy bunny ears and whiskers.

London has long had a reputation for young fashion talent, but the designer old guard also provided further reminders of why the capital’s fashion reputation rests on the rich depth of its storytelling.

Michael Halpern, in his Halpern show, paid homage to his mother, Cheryl’s personal style, with leopard print velor and cascading sequins. In her show notes, Molly Goddard wrote that she wanted to capture the joyous mood of “people out to have fun,” tempering her hallmark color-popping cascading ruffles on wearable T-shirt dresses and puffball skirts. And inspired by the conversation about women’s bodily autonomy that followed the US Supreme Court’s decision to strike down the constitutional right to abortion, Christopher Kane delved into the female anatomy, the rib-like slivers of clear PVC strips that hold cutaway skirts and bralettes together. A literal medical depiction of the muscles and veins that adorn the silk column gowns.

It was Erdem — whose collection explored the preservation of the past, especially those in art conservation — who came closest to matching the mood of the nation. Sweeping double-breasted trench ballgowns, fringed silk coats and full-skirted dresses with intricate floral embroidery – some covered in dust sheet-esque white veils – are shown, particularly among the colonies at the British Museum, during the dawn of the Sun. to be determined.

But what can be done but to move forward? With his first foray into menswear, Simone Rocha embodied that spirit in the frescoed halls of the Old Bailey, the central criminal court of England and Wales. Oversized bubble bombers, layers of sequined tulle and grounded corsetry with delicate petticoats and parachute straps – for both sexes – clearly reflected Rocha’s flair for the romantic and the real, and also broke new ground.

And at JW Anderson, the designer’s focus was now firmly on — more specifically, as the designer said after the show, the parallel transitory realities we access when we “fall into our screens and become our phones.” Guests fought their way through the streets of Soho on Saturday night to reach a cavernous gambling arcade where, in the neon glow of slot machines, Anderson offered costumes that evoked a wacky universe entered through a portal of digital devices.

There were rompers and halterneck mini dresses with screen saver stock prints of dolphins, palm trees and goldfish (at one point, model Emily Ratajkowski came gliding in a black tee with synthetic rubber fins on her back); plastic computer keys poured with clothing shift; oversized sweaters that hang upside down on metal hangers across the shoulders; And pixelated glitter or mirror-like clothing reflects the world around us.

Asked later about the optics of fashion shows during a period of national mourning, the Northern Irish designer – whose final look, a black t-shirt reading “Her Majesty The Queen 1926-2022 Thank you” – used the lettering to be displayed at bus stop shelters around the city. London was adamant about how it should face its new reality – like the tribute posters.

“It felt important to continue, because this is a time when London needs to stick together, and right now, some of the young designers in this city are at risk of losing their business,” he told reporters backstage as revelers outside drank the night away. “It’s a A very British attitude.”