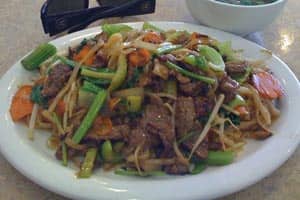 Two men with big appetites have been banned from an all-you-can-eat restaurant in the UK after the restaurant’s manager feared they could drive him out of business.

George Dalmon, a former rugby player, and his friend Andy Miles were banned from the Gobi, an all-you-can-eat restaurant in Brighton, after the manager branded them “two pigs”.

The men will each eat five bowls of stir-fry during their regular meal at Mongolian Barbecue, which invites guests to create their own dishes from the buffet, the Daily Telegraph reported.

Diners are told they can request meals “as many times as they like” for £12.

The manager, who did not want to be named, said the two friends were taking him for business. He said: “Basically they just come in and take the pig out. We put up with them for two years but I’ve had enough.”

“They are in such a hurry to kill everyone and ruin everything. We are supposed to be a buffet but before people get there they eat everything from the bowl. We just can’t keep doing this,” the manager said.

He said diners only drink water and never pay the optional service charge. He added: “We’re not a charity, we’re a business. It’s our restaurant and we can tell people if we don’t want them to come back.”

But Dalmon said the restaurant should honor the publicity. He said: “They only have small bowls and you can’t get enough in there so we always go back for more.”

“We’ve been eating there for years and then suddenly the owner came in front of all the customers at our table and went absolutely mental. He said we were a couple of pigs and we were banned for life. I couldn’t believe it,” he said.